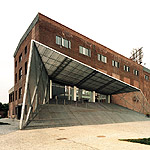 But while firms from around the world are delightedly helping China push its design boundaries, the country’s own young architects may be the most interesting to watch. On the Edge: Ten Architects from China, edited by Ian Luna with Thomas Tsang, is the first English-language anthology to place them firmly in the spotlight.

The learning curve for these young, hip studios has been a steep one. Though the nation can boast a rich aesthetic heritage, Mao’s Cultural Revolution put pay to any form of modern exploration in the field. It also left most of the older architectural masterpieces in tatters. Design students in the 1980s and ’90s had no creative role models and little contemporary Chinese design to draw from, leaving them with something akin to a blank canvas.

A number of searing questions came with it. Should architects continue to draw from the West, from Russia, and from the past, or could a new language of their own be created? What exactly is “Chineseness”? What does modernity mean, and what role should preservation play in the way forward?

These issues of identity and ideology are shaping the nation’s urban fabric, and some remarkably fresh projects are rising out of the debate. With this anthology, Luna aimed to offer a brief slice of political context, an understanding of the sector’s greater challenges, and a good look at how the industry’s more formidable minds are choosing to respond.

Yung Ho Chang is one of China’s most influential modern architects, and the studio he cofounded with Lu Lijia — Atelier Feichang Jianzhu — was the country’s first ever private practice. He returned from the United States in the 1990s to pursue work that, as the editors describe, “opposes mega with mini, re-emphasizing a humane and harmonious scale.” China was booming at an alarming rate, and Chang aimed to counteract the tendency of developers toward the big, the brash, and the brutal.

One project in Beijing’s central business district, the Pingod Sales Center, called for the transformation of a heating plant into a modern art space and sales office. Choosing to keeping the old brick shell, Chang and his team inserted a flared steel grille structure into one side of the facade and a series of brightly colored translucent doorways into the other. Inside, skylights light a huge, warehouse-sized room. The changes were playful, yet hip enough for an urban art space. They also carried the studio’s signature sensitivity for the past.

Chang, who now heads the architecture department at MIT, also wrote the introduction to On The Edge. “Architecture is one of the few disciplines,” he notes, “in which returnees (including this author) are plying influential roles along with the home-growns. Translation still needs to be done, since the locally schooled architects are not confined by the definitions in the original languages and are free to interpret and invent.”

One of these homegrown talents, Xu Tiantian of DnA Beijing, is among the few Chinese female architects to helm a studio. The book showcases her firm’s Songzhuang Art Center, built just last year. It serves around 700 artists, experimenting with the idea of a contemporary “painters village” — formerly small, self-run sets of cooperatives outside the jurisdiction of the government. The center was commissioned when the authorities started to recognize the value held internationally by the local art scene.

The building offers 27,000 square feet (2,500 square meters) of flexible gallery space within a bold, brick-clad structure that floats on a glass base. For Xu it was important to design something that would remain useful throughout the area’s likely growth. “The program has current and future users with different needs and views,” she explains. “While the urban context grows and its function program alters… the building develops as well.” Xu and her team aspire to architecture that can reflect China’s uniqueness, by neither rebuilding traditional symbols nor, as she puts it, “relocating a modern architecture from Berlin to Beijing.”

Ai Weiwei hoisted his international profile with Beijing National Stadium, well known as the “Bird’s Nest,” a collaboration with Herzog & de Meuron that is nearing completion. At home and in Asia, however, Ai has long been known as one of the continent’s more rebellious geniuses. The book dubs him “a prince among China’s reigning enfants terribles.”

Styling himself as a conceptual artist, Ai’s designs tend to rail against the country’s sociopolitical mechanisms, often with a satirical, or at least emotionally provocative, edge. He named his studio FAKE Design. Among his projects in the anthology is Nine Boxes, Beijing, a barbed response to the capital’s growing set of high-end gated communities. The pages show a clutch of living “boxes” clad in galvanized steel sheeting. Ai is also known for Yiwu Riverbank Park, an almost surreal, geometrically stark landscape of indigenous granite. The park was dedicated to his poet father, who was humiliated at the hands of China’s reeducators.

Alongside Shenzhen’s Urbanus, Shanghai’s MADA s.p.a.m., and a clutch of other studios, both emerging and established, Luna chose to include a few Hong Kong firms in his collection. As an architecturally conservative city, Hong Kong unwittingly exports much of its design talent across the border. There designers find greater professional freedom, while going home at night or on weekends to a cosmopolitan financial hub. This does give rise to a few questions, however — namely, whether the territory’s architects and their work can be characterized as Chinese.

“I think the starting point of our designs are very much Chinese, or to do with Chinese sensibilities,” says Rocco Yim, founding principal of Hong Kong’s Rocco Design Architects. “But I think our techniques, the use of materials, the spatial manipulation is influenced from difference sources.”

Yim points to a residential project featured in the book alongside a couple of his firm’s more extravagant civic designs. The Jiu Jian Tang Villa in Shanghai combines traditional and modern international elements, fitting the lifestyle of an extended Chinese family but still allowing the family to feel fashionably current. The villa is positioned around two courtyards in an almost conventional composition, balancing privacy with integration. The architecture is unabashedly modernist, however, replete with glass and aluminum, lashings of natural light, and angular water features.

On the whole, Luna’s anthology takes a clear-cut snapshot of China’s contemporary design scene in its ambitious fledgling stage, showcasing projects that would get far too little international attention otherwise. The book should be enjoyed while such a compact view is still possible. As China’s architects sprint to keep up with the evolving demands of their countrymen, keeping up with the architects themselves may prove to be just as hard. One imagines that a similar book project in ten years will be less straightforward.