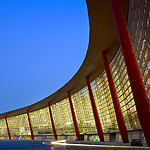 The Chinese have long been good at big gestures, and one of Beijing’s latest — courtesy of London’s Foster + Partners — is lifting spirits in the capital at a rate of thousands per day. As the world’s largest airport terminal, Beijing Capital International Airport’s Terminal 3 is a striking combination of British finesse with China’s brute power and bureaucratic will.

The Chinese have long been good at big gestures, and one of Beijing’s latest — courtesy of London’s Foster + Partners — is lifting spirits in the capital at a rate of thousands per day.

As the world’s largest airport terminal, Beijing Capital International Airport’s Terminal 3 is a striking combination of British finesse with China’s brute power and bureaucratic will. The terminal exceeds one million square meters (11 million square feet) according to Foster + Partners, and is expected to serve an estimated 50 million passengers per year by 2020, with up to 7,000 international passengers per hour.

The mammoth project is being credited with successfully re-tuning airport space — a feat occasionally attempted and rarely achieved.

Beijing’s Terminal 3 joined the two existing overworked airport wings in February 2008, and will be cutting its teeth on the million or so sports fans set to descend for the Summer Olympics. The building is a reassuring symbol in a country that has seen explosive economic growth put real strain on its infrastructure.

The central government chose one giant for another, and Norman Foster’s British architecture powerhouse won the competition with a building as vast as it is fluid. Foster + Partners collaborated with the Beijing Institute of Architectural Design (BIAD) — a large, state-owned operation with a project list that includes The Great Hall of the People and the airport’s Terminal 2. The architects teamed up with Arup for structural and mechanical engineering, and Dutch airport consultants NACO rounded out the joint venture.

Spearheaded by Foster himself and Mouzhan Majidi, the terminal design has elicited creative comparisons with everything from the Forbidden City to a double-headed snake. Reviews have largely been positive. Terminal 3 has fared better than Beijing’s last curvaceous high-tech newcomer, Paul Andreu’s National Theatre, rather derisively dubbed “The Egg.” The airport’s sleek, high-tech curves appear graceful, aerodynamic, and rather welcoming.

Made up of three slim, connected volumes — T3A, the processing terminal; T3B, international gates; and T3C, domestic gates — the terminal stretches essentially north-south in a long, mostly linear form. The building forks out at either end from cathedralesque halls, extending the perimeter to accommodate a total of 120 gates, 85 of which are contact aircraft stands.

Passengers heading towards their gates find the space paring down intimately along their journey. The slenderness of the design has also kept the footprint small and manageable, and orientation straightforward.

Visual cohesion was a clear priority in the design, and practically the project works well — there’s little that’s easier to navigate than a straight line. From tip to tip the airport is 3.25 kilometers (two miles) long, but all-around glazing and an open upper mezzanine level have kept sight lines clear. High-speed automated people-movers hit up to 80 kilometers per hour (50 miles per hour), making the cross-terminal journey in about two minutes, end to end.

There is a color zoning system in the roof canopy, starting with bright red at the T3A entrance, and moving through 16 different flame-colored tones through T3C to the end of T3B. The same colors add texture and enhance the curves above the arrivals and departures hall.

International arrivals enter on the upper level to a sweeping view of the airport — a far cry from the corridors and basements so common in airports worldwide.

The palette was culturally inspired, according to Foster. “This is a building born of its context,” he says. “It communicates a uniquely Chinese sense of place… in its dragon-like form and the drama of the soaring roof that is a blaze of ‘traditional’ Chinese colours — imperial reds merge into golden yellow.”

Also fitting neatly with images of the regal and religious in China, an army of bold red pillars marches along the central axis and continues outside.

The architects have stated that sustainability also drove the design, bringing much-needed environmental goodie points to a city too often cloaked in smog. In fact, Foster has called T3 “one of the world’s most advanced buildings in environmental terms.”

Foster + Partners has provided few details to bolster this claim, however. One example the firm gives of passive design is the southeastern orientation of skylights to maximize morning heat gain in the terminal.

But other sustainable features are described in vague terms: an environmental control system that “minimises energy consumption”; dimensions that allowed “optimum performance of materials,” many of which were supposed to have been procured locally. Unfortunately, the firm’s representatives were unable to offer information in any more detail for this ArchitectureWeek article.

Life in the Fast Lane

Operationally, the building has fared quite well in the months since its opening. Large-scale operations can make for large-scale headaches, however, particularly in a country so new to modernity.

Critics, such as writer Han Song, who penned an article entitled, “The capital airport’s new terminal is like country train station,” have reported a disappointing lack of seating; the incongruous use of low-tech communications devices, such as megaphones and whiteboards; and people milling about aimlessly “like on market day.” Flattened cardboard boxes have been used for seating in bare smoking areas.

The project’s speed was unprecedented. It was built in less time, famously, than it took to hold the public inquiry for Heathrow’s Terminal 5 in London. Within only five months of Foster + Partners winning the T3 project, the firm had set up its China office and produced the design. At the peak of construction, 50,000 workers were recorded on site.

“Consider that this is a building of 1.3 million square metres [14 million square feet],” notes Foster, referring to the terminal and the attached ground transportation center, “yet remarkably it was commissioned and completed in a little over four years.”

That speed may be impressive, but could also be cause for concern — especially when noting China’s reputation for parting people from their homes with little or no compensation, as well as the often passive nature of its trade unions.

But on the whole, the UK-China collaboration has very much taken off: a triumphant balance of “wow” factor with efficiency, super scale with comfort. Olympic contenders will find it a memorable welcome to a city of the new millennium.   >>>

Discuss this article in the Architecture Forum…

Jo Baker is a freelance design and travel writer based in Hong Kong and San Francisco. Publications she writes for include Time, The South China Morning Post, and Hinge Magazine. 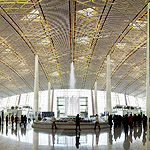 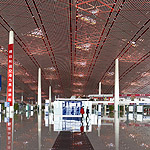 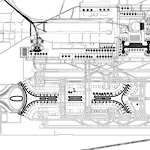 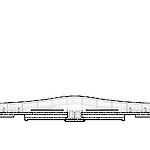 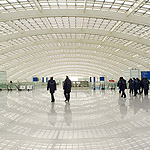 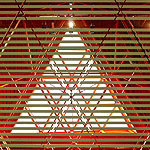 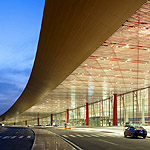